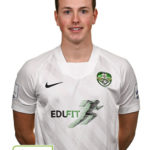 He scored on his league debut against Athlone Town (March 2016) and finished the season with six goals from 26 league appearances.

He moved to UCD in 2017, then had a spell with UCD in the Leinster Senior League.

Ben returned to Cabinteely in February 2020.