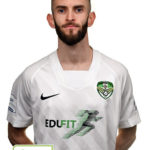 That season, he scored 16 goals in all competitions as he was named PFAI First Division player of the year.

Since then, Kieran has gone on to become Cabinteely’s record overall and league goal-scorer.