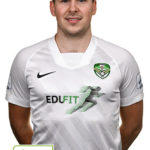 Luke played underage for Cabinteely along the Green Line but joined Bray Wanderers in 2015.

He re-joined Cabinteely in 2018 and played for the club’s U19 side.

The striker made his senior debut away against Bohemians in the EA Sports Cup in March 2018 before making his league bow away against Wexford in May 2018.