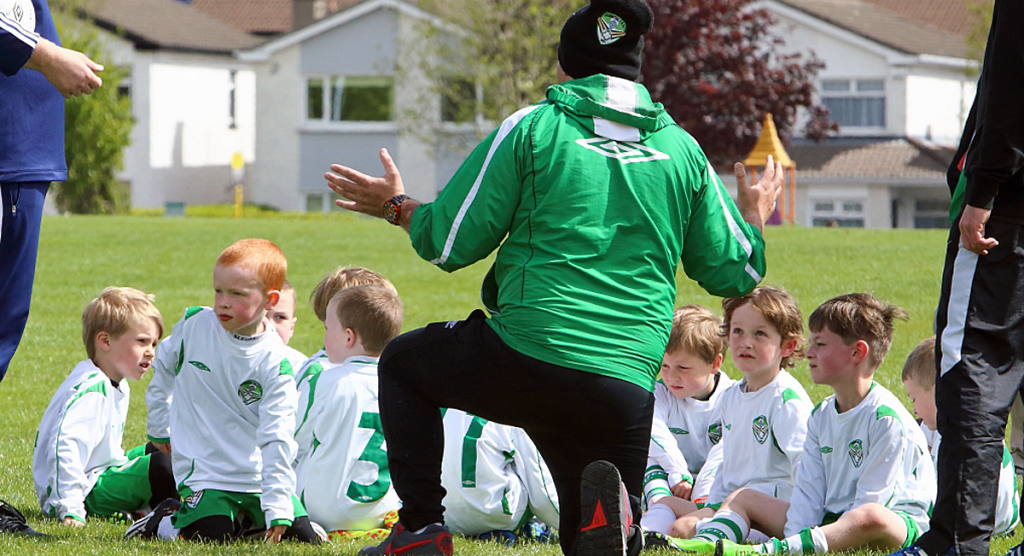 This quick summary of the history of Cabinteely football has primarily been drawn from Joe Dodd’s excellent book ‘Soccer in the Boro’, with some additions from other contributors.

It is indicative of the long and proud heritage that our current 900 players, their mentors and club officials are representing as they play their own full parts in the club that has become the modern day 21st century Cabinteely FC.

Ninety years ago the local Cabinteely football team was not known as Cabinteely, but rather they were commonly known as ‘the Blues from Cabinteely’. In 1926/27, the Blues won the Fifth Division Sunday Alliance with Rock Stars runners-up. The Blues’ Honorary Secretary was P. Coyle of the neighbouring Kill O’ The Grange.

In the Schoolboys League of 1936/37, the Blues were emerging as a force to be reckoned with and with players such as Harry Hill, Hugo Flynn and Peter Farrell were a match for the best teams. The famous Cabinteely side was made up of the following players – Kelly, Brien, Mulveney, Mooney, Sterry, Cullan, J. J. Devlin, Hill, Flynn and of course the mighty Peter Farrell (yes, this is the same Peter Farrell who scored the second goal when Ireland became the first country to beat England at home in 1949 and later went on to captain Ireland – perhaps we have another future Irish captain in the club today?).

It would appear that the Blues changed their name to Cabinteely Boys around this time. Cabinteely Boys then finished runners-up to Johnville in the 1938/39 league, having lost three games to finish on 34 points.

However revenge was sweet as, on May 28, 1939, Cabinteely Boys beat Johnville 4-0 in the replayed final of the Schoolboys League Cup at Congress Park after the original match on May 14 at Newtown Park had finished 3-3. The team was Redmond, Kelly, Mooney, O’Brien, Sterry, Carr, Cullan, Devlin, Dunne, Farrell, Flynn with the goalscorers in the second match being Dunne (2), Flynn and Farrell. The player who stole the headlines was Hugo Flynn, about whom the press wrote “Hugo Flynn was the star of both matches between Cabinteely and Johnville in the final of the Schoolboys League Cup. If that youngster had twice the fight and half the cheek and impudence that he showed to the Johnville defence he would still have been too cheeky”.

And what about this – the gate receipts for the matches were £150 in Newtown Park and £180 in Congress Park? If you know that general admission prices were about 6d (about 3c in today’s money), it indicates crowds of about 5,000 to 6,000 – for youth games (if we had those numbers today, we’d have no difficulty with the development fund!).

On Easter Monday 1940, the Leinster Juvenile Cup U-16 semi-final paired Cabinteely with Dalkey United. After a 1-1 draw, the replay was one-sided, with Peter Farrell scoring two goals in Cabinteely’s 4-0 win. O’Reilly and Devlin also scored in what was a super victory for Cabinteely. The final against Munster Victoria also began with a draw (3-3). Cabinteely again won the replay 6-0 in Congress Park. Scorers were Farrell (2), Devlin (2), Flynn and O’Reilly.

By season 1943/44, Peter Farrell had moved on and was now (at age 19) starring for Shamrock Rovers. Peter’s best friend Tommy Eglinton also playing for a top team – Shelbourne. Peter and Tommy were starting to reach for the stars and in the Summer of 1946 they were both signed up for Everton. Harry Hill left the army altogether and was signed on professional forms for Huddersfield Town (he might not have done as well as Peter but slowly he was getting there). Peter Farrell made his debut for Everton against a Stoke City team that included Stanley Matthews and went on to captain them in time. He also went on to win 35 international caps during his distinguished career.

In the 1950s the club was in fact known as Cabinteely United and was run by a group of locals, namely Joey Reynolds, Jim O’Brien and Dan Kelly and it played in the Wicklow League for many years. Players in that era included Kevin Fitzgibbon, Pat Murphy, Dick O’Driscoll,Tony and Jim Mahon, Pete Nolan, Dan Kelly jnr and Seán O’Dowd.

Cabinteely United players were becoming much more well known and in 1959/60 the Wicklow League was beginning to play a lot of friendlies against teams from the Swinton area of Manchester. On one occasion two players from Cabinteely played. They were C. Rodgers as goalie and Kevin Fitzgibbon as right back.

There was also a team in the 1950s called Cabinteely Celtic, a breakaway from United, and also a team called La Martinière. When Cabinteely ceased to play in the 1950s the club then became known for a short time as Watson’s Nurseries as many of the players worked there. The nurseries were on land now occupied in part by Watson’s estate and Kilbogget Park itself.

In 1962/63, Division Three South of the Athletic Union League had the most borough teams playing in the one league. The teams were Watson’s Nurseries, Cross Celtic, La Martinière, TEK and Parkville. Of all the teams, Watson’s reached the semi-final of the 3rd Division Subsidiary Cup but, unfortunately, they were beaten by West Finglas.

In 1964/65 the rest of the borough teams like Cross, Parkvilla, La Martinière, Farm, St. Joseph’s Glasthule and Watson’s were all “as you were”. In the seasons of 1966/67 and 1967/68 most borough teams were playing in many different leagues e.g. Watson’s Nurseries in Division 3 South.

The current club was formed in 1967, as Auburn FC, and began league football with only one team. Little did those early enthusiasts know what they had initiated!

In 1970, there was an innovation in borough football when a group of men decided to form a league to cater for boys from the age of seven years upwards. Before then, schoolboy leagues started at U-12 and there was no organised league for boys in lower age groups. This new league was called ‘The South County League’ and the men who started it included Pearse Dermody, Jimmy Delaney, Mick Dodd, Tony Sullivan and Paddy Costello. Schoolboy football saw many new teams joining in and playing in the South County League. Among them were Cabinteely Boys FC, which in 1973 had been renamed from the former Auburn FC. At this time, it had only six teams – all boys.

The name was more recently changed to Cabinteely FC, to reflect both the numbers of individual girl members and its excellent ladies teams.

While the club had a sequence of successes in the late 2000s and early 2010s at senior level in the Leinster Senior League, it took the momentous decision to apply to join Division 1 of the League of Ireland for season 2015. This and the associated national U-17 and U-19 teams brought much more nationwide attention and acclaim to the club.