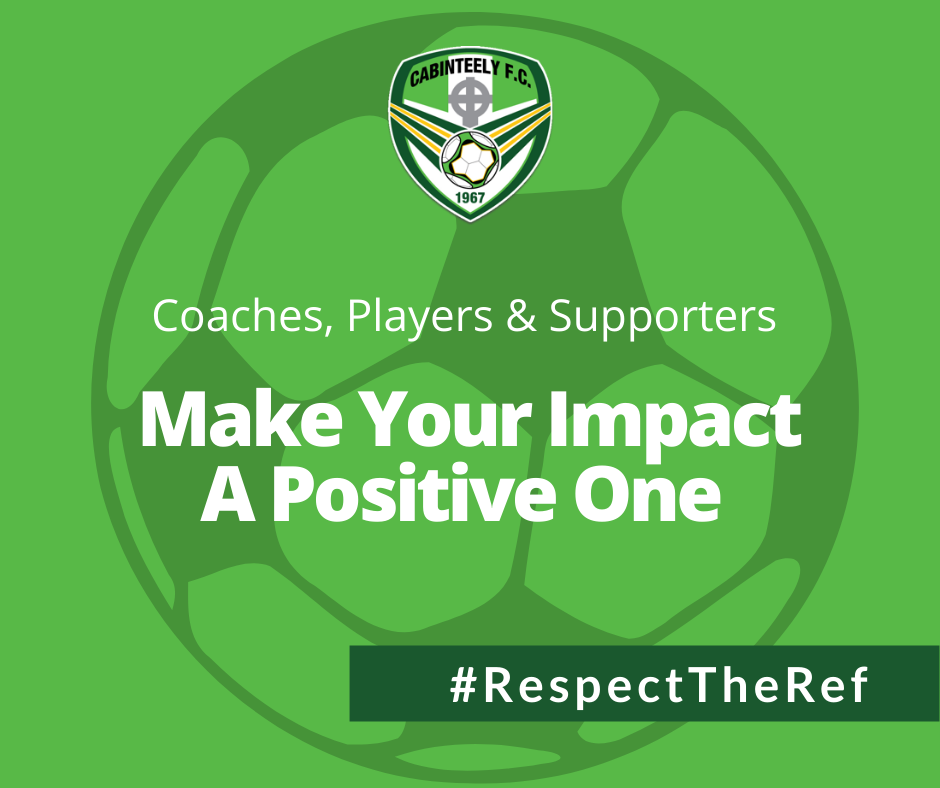 Players, parents, and supporters will applaud referees at the end of all matches this weekend.

Cabinteely FC has launched a #RespectTheRef campaign in support of all referees and match officials, following the announcement that referees in the North Dublin Schoolboys/Girls League and the Metropolitan Girls League are withdrawing their services this weekend.

Cabinteely FC plays primarily in the Dublin & District Schoolboys / Girls League and also the Metropolitan Girls League. The club has called on its over 1,000 players, parents, coaches, managers, supporters and visiting teams to applaud the officials after all matches over the weekend at its home pitches in Kilbogget Park, Dún Laoghaire, to show appreciation for their officiation over the hundreds of games played every weekend in the club and throughout the country. Players will be invited to form a guard of honor and to applaud referees off the pitch after each match.

The Cabinteely FC campaign aims to highlight to everyone that abuse from the sidelines or on the pitch will not be tolerated on any level and the club is willing to take action against such inappropriate behavior.

The campaign will be highlighted to members and the wider community via the club’s website, newsletters, and social media channels over the weekend.

Cabinteely FC Chairman Tony Richardson said, “We’re delighted to show our support and appreciation to all referees and match officials. It’s an important message to all our members and supporters that these matches simply couldn’t happen without the dedication shown by so many. We’re fortunate to have an excellent supporter base where, overall, any such instances are rare. Nevertheless, anyone such incident is one too many and will not be tolerated. We express our warm appreciation for all referees and we hope that many other sporting clubs join us in an overt expression of this support at the weekend”

Founded in 1967, Cabinteely Football Club is a unique voluntary-run organisation working for the community throughout Dún Laoghaire Rathdown. Rooted in the community and playing at all levels in Irish football, the club has 1,000 players in 60 teams (boys, girls, men, ladies, and Special Needs), making up an extended Cabinteely family of over 3,000 individuals. The club’s guiding principal is “football for all, from small to tall” and this is the cornerstone that drives all of its activities.