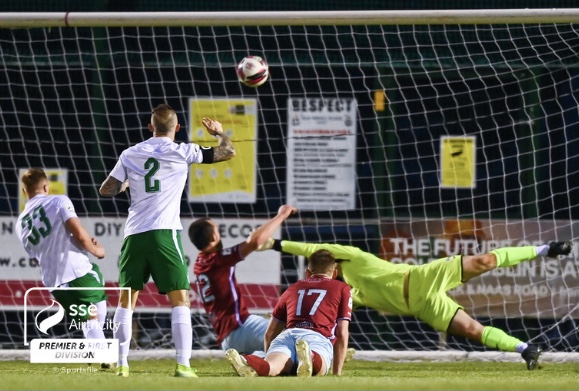 Mitchell Byrne picked a fine moment for his first Cabinteely goal as his 88th minute winner saw Cabo overcome a dogged Cobh team, take their second win in a row and continue their fine start to the season.

On a still May evening at a resplendent Stradbrook on Friday, the visitors almost found themselves ahead in the third minute when a Killian Cooper ball saw right midfielder Christopher O’Reilly through on goal. O’Reilly fizzed his shot across the keeper but Adam Hayden did very well to get his left leg out to turn the ball around his post for a corner.

After this bright start, neither team was able to impose themselves on the game with both goalkeepers seeing much of the ball as a result of wayward long balls.

Cabo did test Sean Barron on one occasion after a Dean Casey cross wasn’t properly dealt with. Marty Waters produced a moment of great skill as he used his chest to control and turn before unleashing a right footed volley that Barron did well to get across to and parry away for a corner.

As the temperatures fell at the start of the second half, the game did thankfully come alive. Eoin McPhillips replaced Eoin Massey on 48 minutes – a move that led to more positive play from the home side. McPhillips almost made an instant impact when a minute later his shot from the edge of the box had to be tipped around the post.

Cobh also began creating chances of their own with Hayden having to tip David O’Leary’s effort over the bar on 53 minutes when Cabo failed to comprehensively clear their lines.

As we passed the hour mark, the game continued to open up with Cobh again looking dangerous but never able to apply the finishing touches. No more so than when Killian Cooper got on the end of a Darryl Walsh free kick in the home box. He did well to fire across the area but no team-mate was there to capitalise.

The home team did always look capable on the break as Hayden’s distribution was used to launch attacks. Marty Waters once again showed his class on 67 minutes when Niall Barnes found him in the box. Waters twisted and turned before nutmegging Cian Murphy and driving into the six-yard box, but his shot was ultimately blocked by Barron for another corner.

Ramblers continued to be under pressure as Ben Hanrahan, Zak O’Neill and Jordan Payne all got shots off but they were unable to test Barron. As the game wore on, a bill all draw seemed an increasing inevitability before a late flourish of activity.
In the 87th minute Dean Casey’s corner was brought in by Mitchell Byrne in the Cobh box, the Cabo defender appeared to be pushed in the back by Jake Hegarty but referee Gavin Colfer had no interest.

Byrne would have the final say though as a minute later he gave Cabo the lead. McPhillip’s free kick found substitute and Green Line graduate Jem Campion at the back post. Campion kept his composure to square to an open Byrne in the six-yard box. The defender did very well to fire his effort over a diving Barron and into the roof of the net giving Cabo another late goal at Cobh’s expense.

The Munster outfit nearly had a last gasp goal for themselves when Ian Turner raced through on goal. He was forced to cut back under pressure from Byrne and see his shot blocked McWilliams, who was once again in the right position as he and centre back partner Dan Blackbyrne had been all night.

Cabo were able to see out the closing minutes and secure a very welcome three points to take them to fourth in the table, three points off the top.

Next up a trip to sixth placed Bray who will bring their own momentum into the game after securing a first win of the season with an injury time winner at Galway.