It was back to winning ways on Saturday morning after a heavy defeat two weeks ago for our Under 15 DDSL Major side.
Both teams looked to take an early advantage on a lovely surface suitable for football at Corduff Park, but the visitors started the brightest with early chances from Jack Dempsey which resulted in the opposition goalkeeper making some great saves.
The breakthrough came from a decisive pass from Isaac Kendrick which set Dempsey through on goal to find the net with a clever finish.
The second score came just before half-time when Dempsey again went one on one with the custodian, who made a great save but only for Cian Ennis to follow up for a tap in.
Again, the White and Green’s started the second period with positive intent. As a team, they weathered the Corduff rally.
They made it 3-0 when a lovely through ball from Dylan McGuirk set Pearse Kearney clear to find the net in a one on one.
The fourth goal came again from a superb McGuirk pass to release Leo Kearney who rifled his shot into the net.
Late on, the hosts broke away only for Jack Coone to take down the striker with a penalty awarded. However, Cabo goalkeeper Alex Traynor made himself big to pull off a great save to keep hold of a clean sheet.
Player of the game: Jack Dempsey. 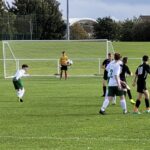 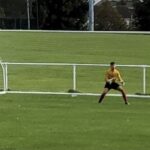 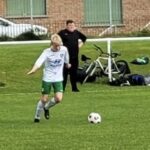 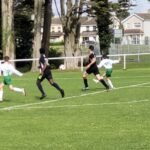 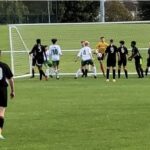 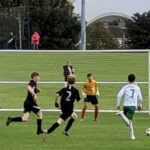 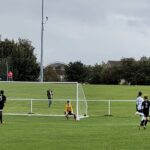 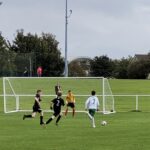