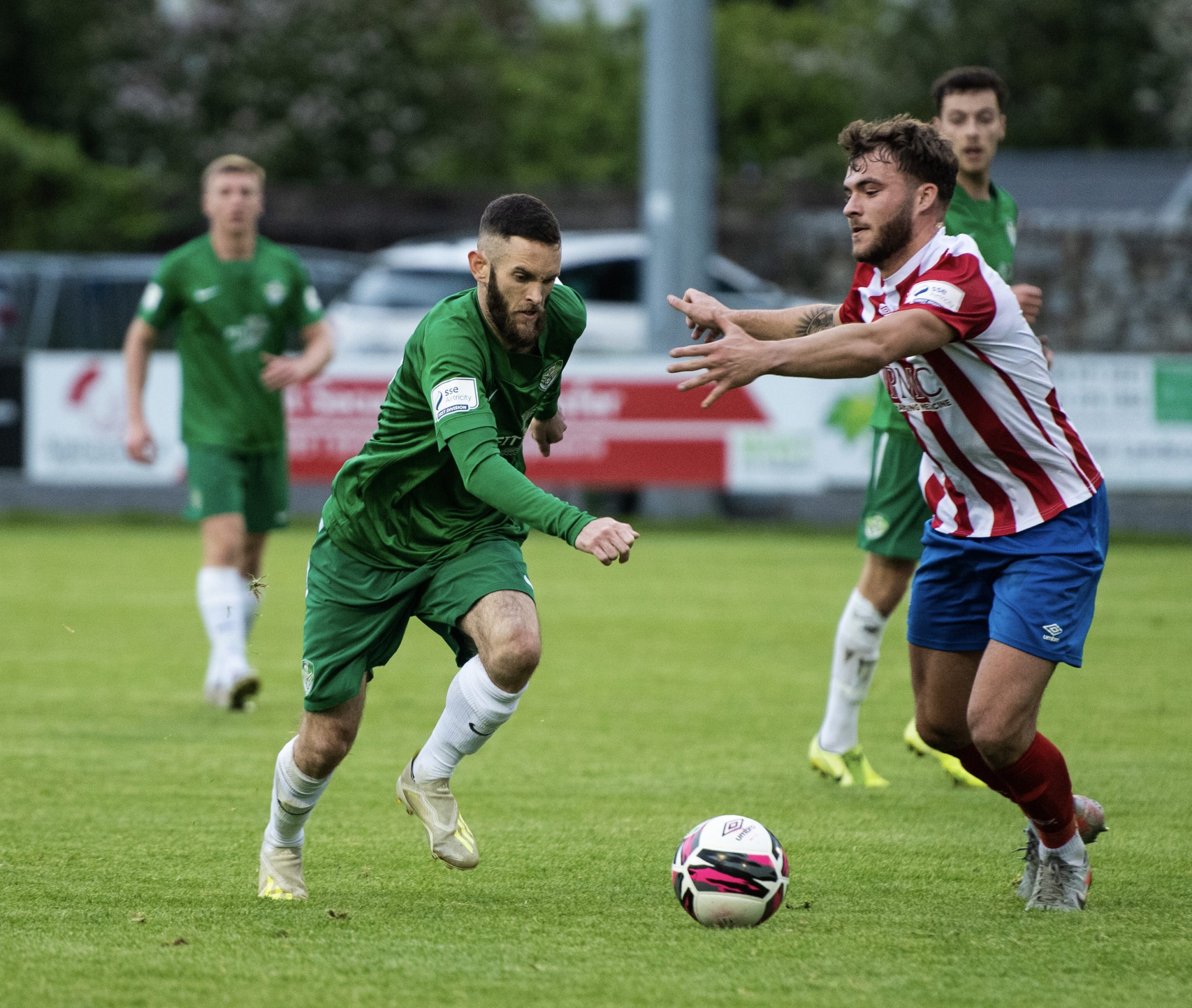 Five minutes either side of half time provided all the excitement as Cabinteely ran out 2-1 winners in a hard-fought battle against Treaty United.
The Limerick side’s red and white strip, making its first outing to Stradbrook, saw Cabinteely looking resplendent in their new green away strip on Friday.
It was a cagey start to the match with neither side able to impose themselves on the match.
A shift in formation for the hosts saw Dean Casey return to the left wing where he has looked most threatening this year as Green Line graduate Zak O’Neill showed his versatility filling in at right back.
Cabo did have the best of the early opportunities as Alex Aspil, in search of his first club goal, cannoned his effort off the crossbar in the 14th minute.
United’s Kieran Hanlon took a similar approach but neither of his first half long-range efforts troubled Ben Clark (on his home debut) in the Cabinteely goal.
Just as it appeared the sides were about to enter the break all even, Marty Waters – Cabo’s record goal scorer – popped up to get his first goal of the season.
Clark’s goal-kick was flicked on by a leaping Labutis in midfield to release Waters, who took one touch past a stranded Tadgh Ryan at the edge the box before he guided left footed effort into the open goal.
The home teams lead was short lived after half time as the visitors found an equaliser three minutes into the second half.
Edward McCarthy’s first time cross from the right was parried by a diving Harry Halwax (who had replaced an injured Clark at half time) but fell at the feet of Sean McSweeney just inside the box.
McSweeney’s effort was on target with Mitchell Byrne standing on the line not being able to prevent it going in.
The parity lasted less time than Cabinteely’s original lead as their advantage was restored within two minutes.
McSweeney, in search of a second, had a shot from distance well saved by Halwax. Zak O’Neill at right back went long in search of Waters who flicked on to Jordan Payne striding down the right wing.
Payne cut inside and his shot was palmed onto the crossbar by Ryan. Ben Hanrahan was beaten by the rebound but Vilius Labutis charging in from centre-midfield was on hand to nod the ball to the net.
The White and Green’s had a chance to further their advantage just two minutes later again when Aspil slipped through Waters who once again found himself one on one with Ryan. This time however, the striker could only watch as his effort rolled across goal and past the far post.
The home side remained in control in the second half with both Luke McWilliams and substitute Jem Campion unable to turn good heading opportunities into efforts on target.
Halwax, the Derby loanee, remained untroubled for the remainder of his first appearance at Cabinteely as they ended the first round of fixtures with five wins and very much in the hunt for that much coveted play-off spot.
They’ll hope to continue winning ways when they welcome Wexford to Stradbrook next week. The Slaneysiders already appearing a stronger outfit in the short tenure of new manager Ian Ryan.