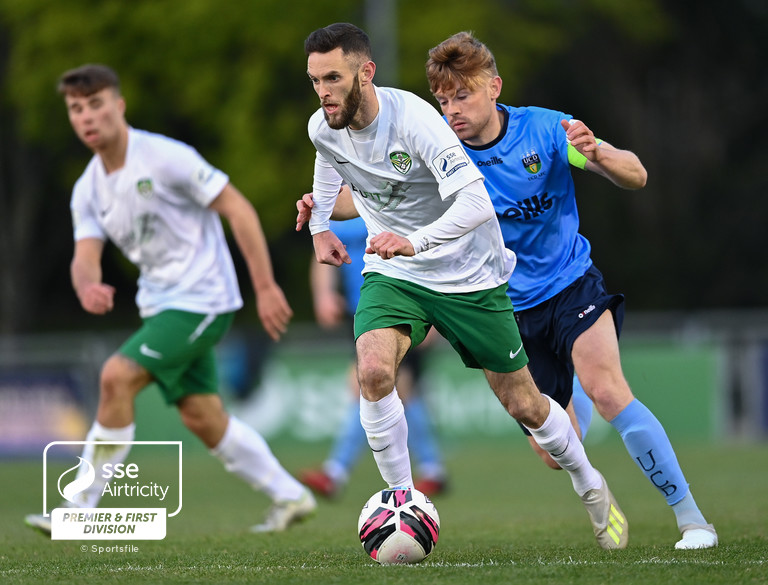 While Cabinteely players staged a pre-match protest against the FAI’s decision to award last week’s cancelled fixture to Galway, the events of the past week perhaps contributed to the defeat against UCD.

The away starting line-up masked up as they stepped on the pitch at the Bowl on Friday and stood on the side-line in front of the stand as a statement was handed out to the assembled media.

The players took the opportunity to highlight that they deem to have been “penalised unfairly” as a result of following HSE guidelines to stand all players down.
Despite the pre-match distraction, the visitors were quick off the mark with Vilius Labutis’ free kick from the right finding Luke McWilliams in the box. The ensuing scramble seemed to feature a UCD defender handling the ball on the ground, but referee Oliver Moran was not interested.

After six minutes, the quick start soon turned against the White and Green’s as an attempted counter attacked ended in the disaster. Lorcan Healy’s clearance was headed on by Liam Kerrigan to unleash an onside Colm Whelan who calmly stuck the ball past Adam Hayden. Dean Casey’s volley a minute later was relatively tame and an easy save for Healy. The Students came close twice in the following minutes. Set pieces from Boore and Weir were met by Sam Todd, who once failed to make sufficient contact to turn the ball on goal; and at the second asking was denied by the post.

Cabinteely settled into the game as they sought to draw level. Kieran Marty Waters, making his 100th league appearance for the club, looked the most threatening as he struck the post and tried to lead his team back into the match. His efforts were very much in vain as on the stroke of half time, Whelan once again found himself through on goal after a ball from Donal Higgins. Despite unfounded suggestions from the back three of him gaining an illegal head start, the flag stayed down, and Whelan once again left Hayden stranded.

Kevin Knight’s frank and honest exchange of views with the referee saw Cabinteely’s record appearance holder talk himself into the referee’s notebook after the whistle.
The game was effectively ended on 47 minutes when Boore once again found Whelan. This time, the UCD number 10 had more work to do as he beat two covering defenders before calmly finishing to complete his hat trick.

It could have been so different, as moments before at the other end, Cabo captain Dan Blackbyrne skewed a close-range volley narrowly wide.
Dean Casey provided Cabo fans with a brief glimmer of hope when his 52nd minute free kick was beautifully curled into the top right corner with his left foot. This hope was short-lived as within four minutes Whelan’s pace once again caused the visiting defence to split. His square ball shifted the roles of provider and scorer as a simple ball to Higgins resulted in a tap in.

There is still cause for optimism among Cabo fans as the Green Line showed its strength once more. On the back of several injuries to regular starters, Pat Devlin was able to introduce a third member of the Knight family to senior football as Conor, brother of Kevin and Irish international Jason was brought on for Sean McDonald.
Then, Jem Campion also made his senior debut in replacing Marty Waters in the closing minutes.