Facing a tough local derby in the Semi Finals of the Challenge Cup in the Eastern Women’s Football League, Cabinteely came out on top in a seven-goal thriller.

Played at Kilbogget Park on Sunday afternoon, the White and Green’s came from 1-0 down to defeat TEK United by a 4-3 score-line.

It showed great character for the squad having succumbed the week before to Finglas United at the same venue in the Premier Cup Semi Final.

TEK came into the last four tie on a high having reached the final of the Premier Cup themselves.

Despite Cabo starting the game the better team with majority of possession, the visitors went ahead after a defensive mistake at the back.

But the White and Green’s kept their confidence up and bounced right back with a goal from Catriona McGilp.

Soon after, they went 2-1 up when Resa Dunne swung in a tantalising corner with Sarah Jane Doyle there to apply the finishing touch.

The home team did not let up in their attacks, closing their down opponents, before making it 3-1 with great team build-up play and finished off to the net by Jojo Andrews.

That momentum continued before half time as McGilp went on to grab her second of the contest to make it 4-1 at the interval.

Going out in the second half, TEK pushed hard to get back into the game. They did so with an early score just after the turnaround.

Great defensive work by the hosts kept United at bay until they scored late on.

With a fantastic team effort and shape, Cabo held on to deservedly advance to the final.

There they will face Terenure Rangers A, Whitehall Rangers or Lucan United. 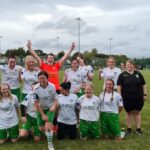