At a certain point, those involved with Cabinteely must begin to wonder what they have done wrong to warrant this level of misfortune.

After a three-hour journey out of the capital on Friday (which took half the time on the way back), Cabinteely eventually arrived in a wet Athlone Town Stadium where summer football felt it had truly ended.

With both sets of players caught up in delays, kick-off was delayed 15 minutes but neither squad seemed unduly lethargic when proceedings did get under way.

Both goalkeepers were forced into saves in the opening ten minutes, but the game’s first notable moment came in the 19th minute when Keith Dalton was issued a straight red card for a challenge on former team-mate Shane Barnes.

It was a challenge that saw home fans call for red while the away faithful pleaded leniency, despite being fully aware of how they would feel if the challenge fell on a player in white.

Despite Cabinteely now facing 70 minutes against an extra man, anybody who tuned in for what remained of the game would be hard-pressed to realise such was the effort of the Cabo squad.

Shane Barnes did nearly give the home side the lead after beating Adam Hayden five minutes later and shooting wide when it seemed harder to miss. Ben Feeney provided a threat for Cabo a moment later when his header fell inches wide just a minute later.

The second half began with both teams still looking to edge in front without any discernible chances.

The breakthrough eventually fell the way of the home side just before the hour mark when Aidan Friel pinged a ball across the width of the pitch to left-wing James Doona. The wide man cut infield before striking low and hard into the bottom right corner.

Cabinteely continued to push for an equaliser with substitutes Vilius Labutis and Eoin McPhillips making an impact. With ten minutes to go, it was Labutis who found Ben Feeney full of running down the right flank.

The teenager then did what Cabinteely fans are almost becoming accustomed to by now as he beat his man before unleashing a shot from the edge of the box that left Mícheál Schlingermann floundering. The Green Line graduate’s effort was similar to his strike against UCD, only this time with his left foot.

What happened next felt all too familiar…

After a valiant fighting effort, Cabo once again fell to a last-minute strike away from home. This time it was Kurtis Byrne’s turn to break Cabo hearts as he finished inside the box in the 93rd minute to send the visitors away with nothing. 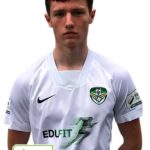