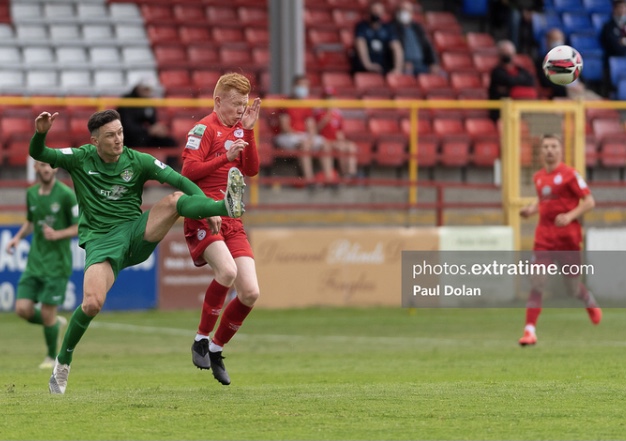 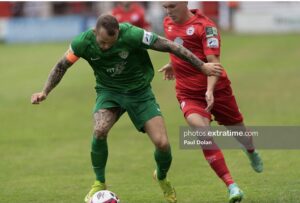 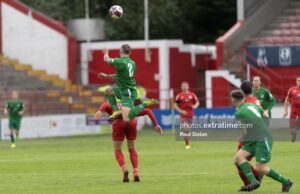 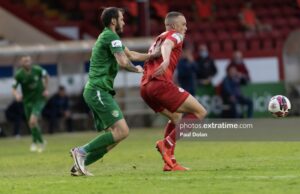 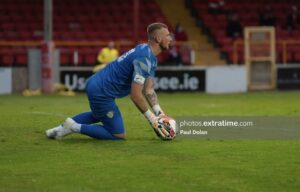 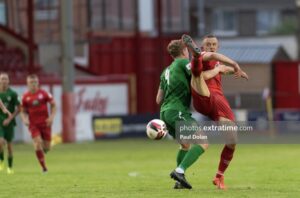 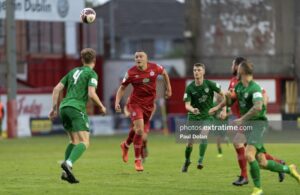 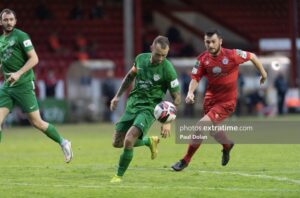 While Shelbourne fans want to Save Tolka Park from destruction, Cabinteely fans could be forgiven for never wanting to return there again after Friday’s heartbreaking defeat.

For the second week in a row, the White and Greens can feel unlucky to have taken nothing from a match where their performance warranted reward.

While the home side were heavily  tipped to make light work of Cabo, the visitors showed they were more than capable of playing with the best in the league.

There was good news for Cabo fans when the team sheet appeared with Jack Hudson making his first appearance for the club since March 2020. He was a welcome addition to the back four and looked as if he had never left the position.

The first half was a cagey affair as Shels looked to extend their lead at the top of the table but were frustrated by the dogged work of Eoin Massey playing in front of the back four and Vilius Labutis working tirelessly in the midfield.

Eoin McPhillips, brought into the starting 11 after his fine cameo last week, provided a sure touch and an outlet to hold possession in the middle of the park.

The Reds were only able to create one chance in the opening forty five minutes where Dayle Rooney played in left back Kevin O’Connor who found space in the Cabo box but the ex Preston and Cork man could only skew his left footed effort across the goal.

Early in the second half, the teams traded shots from distance with McPhillips hitting wide left for the visitors while Dayle Rooney fired his effort over the bar.

For the next half hour while Shelbourne held possession Cabo often looked the more likely to score as they frequently created chances on the break.

First up on 55 minutes, Zak O’Neill broke down the right wing after work from Sean McDonald, Labutis and Massey in the midfield. O’Neill’s cross found Kieran Marty Waters in the box, but the man making his 300th career appearance could not turn it goalwards.

Ten minutes later, Luke McWilliams’ cross from the left wing was almost an own goal as Luke Byrne’s clearance was put behind for a corner.

With just over ten to play, Sean McDonald then created another chance to give the visitors the lead when he beattwo Shelbourne defenders and squared to substitute Alex Aspil who couldn’t get his shot away to score what would have been a memorable first goal for the club.

The heartbreaking moment came as the clock had ticked over the ninety-minute mark when Shelbourne won a free kick inside Cabinteely’s half.

Kevin O’Connor’s ball into the penalty area caused confusion between goalkeeper and defence as the ball flicked off a leaping Aspil’s head and found the empty net to give Shelbourne the three points on a night that could have been so much more for Cabo.

In a last throw of the dice Pat Devlin was able to hand a debut to the next graduate of the Green Line as striker Ben Feeney, who was promoted to the senior squad following his hat trick for the U19s last week, was brought on.

With another good performance Cabo can only hope their luck turns next week and the play can be converted to points as they welcome Athlone to Stradbrook.