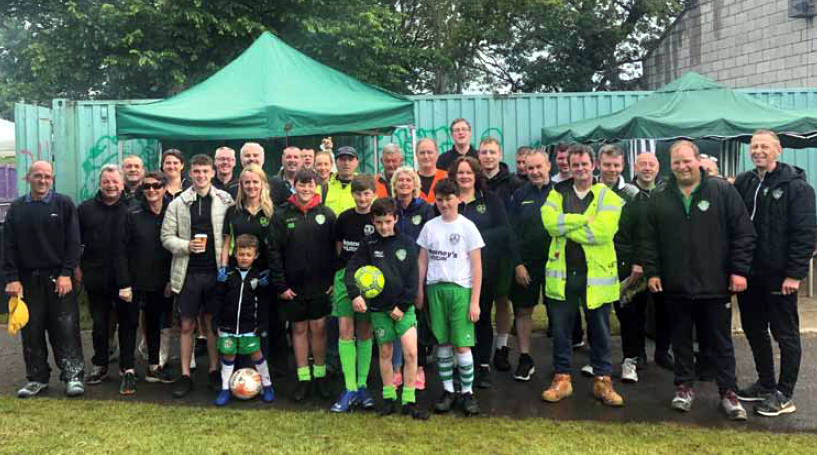 My love affair with Cabinteely FC started 14 years ago.

Looking for a club to start my son Liam’s football career, a neighbour Dermot O’Connor (alias the Doc) directed me to Cabo.

Since then, Cabo has been home to all of my three boys. Liam (17) and Ross (15) help out in the football camps, Robbie (13) will be on hand to help fill the Goody bags for the MWC.

Now to the main characters!! The Club is full of them!! We have Gary Lewins, “Lewinser”- “the money man”; Paul Knight – “Knightser” – “Good in his day, but had a dodgy knee”, and Oisin “the Rottweiler” Ledwidge. Oisin is the “master strategist “ behind the whole event.

Paul “Haydo” Hayden is involved too, but he seems more like “the money man’s carer” at this stage. Their “Wags” are also involved. Olwen Lewins, Cathy Ledwidge, Anita Knight and Karen Hayden. Think of the Corleones and you get the picture.

My favourite rogues are Martin Rice and Adrian Ryan, two great characters who add to any occasion. No one ever calls Martin by his name, he is always Trap (as in Trapatoni). Trap was the “Van Dijk” of his day, light feet and could see a pass. . . that was never on! There is no record of Ado’s football career. . .!

The best bit of advice to new members is NEVER stand still!  You’ll end up being sucked in! A pint from the “money man” Lewinser, a reassuring chat from Knightser and you’re enrolled. That’s it. Forget about romantic weekends away with the missus, Summer holidays are put on the back burner! You become absorbed and, without fail, you enjoy it.

Preparation for the Mini World Cup starts around March. We have several meetings, Oisin runs proceedings and everyone knows their role. The registration website is finalised and launched, and the team selection processes begin.

The Fundraising team gets into full swing. The old reliables are contacted first to see if they’re still on board. They never let us down. The ads are then sent on to the “Doc” (who makes the “Rottweiler” seem very approachable). A lot of banter ensues but we always get there in the end. The “Doc” also ensures the t-shirts, bibs, goody bags etc., are ready in time.

Caroline Traynor looks after the shop with Liz Carry. Trap does the burgers and this year we have Kira in our new café. Declan Traynor and his Dad Ray look after all the announcements throughout the tournament. Over a hundred more volunteers help to ensure a seamless event, such as Paul Smith and his wonderful Dad, Mick. We have Gary Blake organising the refs and praying that they turn up! Forget Wall Street, this is real pressure.

Before the first players arrive there is a team of volunteers who are in Kilbogget from very early in the morning to ensure many magical moments are created throughout the day.

Come the 7th of June, the sun will appear. Our pitches will be immaculate thanks to Pat Finnerty and his helpers. We have the nets up and the Barbeque on. The smell of burgers and hotdogs wafting through the park, the cheers, the laughter, the fun, and the football. Bring it on!